Animated James is, as his names suggests, an animator. He is also an artist, voice actor and musician. He grew to popularity in the Brony Fandom due to his MLP VS Sonic franchise (this contained Sonic vs Rainbow Dash,Tails vs Twilight Sparkle, Amy vs Pinkie Pie, Knuckles vs Applejack, And Beyond Its Garden) and began doing many MLP projects, but they got cancelled. As of Monday, July 16, 2018, Animated James ended, and his channel is now named discontinued channel. 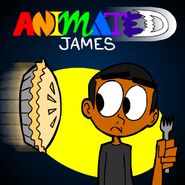 Animated James Horse by ZoruaofEpic
Add a photo to this gallery
Retrieved from "https://the-rift-cafe.fandom.com/wiki/Animated_James?oldid=17129"
Community content is available under CC-BY-SA unless otherwise noted.