As quoted from this video's description; "Gabriel Brown is a 24 year old American singer, song-writer, actor and animator who has been performing and touring internationally for over 14 years. As a child, Gabriel and his brother Nathanael, formed a duo called Just Passin’ Through and toured the US for 8 years, performing originals and classic covers. At the age of 18, Gabe joined the US Navy and was training in special operations when he broke his femur in a sky diving accident. He switched to the Navy’s music department and then spent 3 years touring the Eastern Hemisphere as lead singer for the 7th Fleet Band’s Orient Express. He was awarded three Navy Achievement Medals (NAM's) for being "a superb vocalist/entertainer"; authentically performing many songs in 12 different languages, and singing multiple genres during 302 engagements for audiences totaling over 2 million people. Gabriel was also selected for the lead vocalist position in the Navy's premiere performing unit The Electric Brigade, who perform at Presidential Inaugurations and White House parties. After a 5 year stint in the Navy, Gabe separated from active duty with an honourable discharge and began pursuing his performance career in earnest. He has built up an extensive following around the world and his YouTube channel (under the alias Black Gryph0n) has almost 90,000 subscribers and over 15 million views. Recent album releases include IMmortal, a collection of original electronic songs that Gabe co-wrote and recorded with his brother as well as At Home, an “unplugged” album of ballads with the Crebers. Since leaving the Navy, Gabe joined forces with Michelle and they have been writing, performing, recording and touring extensively ever since."

Gabe has approved this fanfiction as his OC's official backstory.

A lot of bronies think Michelle (the voice actor for Apple Bloom) and Gabe are dating, which they are not. Michelle is underage, so that would make Gabe a pedophile if they were dating. They are simply very good friends, and enjoy hanging out and just goofing around. They first met online and worked on the first project they ever did together. It was a Beat It cover with animations by Animated James . They finally met in real life a year later at BronyCon 2013. Gabe and Michelle have worked on many vlogs and music together since they first met. This video explains very well what their friendship is like. 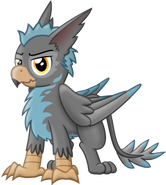 I sense a paradox.

Gabe in real life with his uniform on.

Gabe being his normal crazy self at Mt. Fuji

Singin' with a suit

Add a photo to this gallery
Retrieved from "https://the-rift-cafe.fandom.com/wiki/Black_Gryph0n?oldid=16189"
Community content is available under CC-BY-SA unless otherwise noted.