Videos are done "when they are done"

BrickBrony1894 (aka BrickBoy1894) is a Pegasus Brony Analyst. BrickBrony1894 is also an AFOL (Adult Fan Of Lego), hence referring to himself as "BrickBrony1894". Brick is also a BrickFilmer, where he makes films with LEGO using Stopmotion animation.

Before Joining the Rift Edit

Jordan became a Brony in 2013, a couple months prior to Season 4 of MLP, and the first episode he ever saw was "Wonderbolt Academy." It took a while, though, before he considered himself a Brony.

Getting Into The Rift Edit

On Monday, November 23, 2015, while Jordan was asleep, GoldenFox sent him a message on Skype:

"I apologize in advance for not forewording back to you along with the unforunate mishap of what impressions I have implied behind your back. However, I haven't been able to reach back, partially due the enourmous amount of contacts I have listed as well as keeping in tact with real life chores and other priorities. Now that's nothing to be sorry about since you didn't know. As it is, I can't speak tonight, and the rest of next week will be busy for me since I have Thanksgiving weekend to prepare for as well as a job interview. So I can't make any garantees as of now, but I'll eventually get around to speaking to you.

"One more thing, don't randomly call me. Ask permission first. In fact that's something I would recommend to anyone you interact with.I do this myself to anyone as well whenever I ask for for a call before pressing the dial button. You never know how busy I am or anyone else. In addition, if I'm not up for a call, don't take it personal. There's a pretty big number of things to take care of in life."Anyways, have a good night, I might start something either tomorrow or next week."Fox also let Jordan know that it was he who suggested adding Jordan to the Trial Rift since "part of the decision came off unfair."

Since then, Jordan has been getting along well with Fox. And, eventually, after he was added into the Rift, Jordan did get a chance to have a Skype Call with Fox on December 8th. The call lasted nearly an hour.

Jordan first started on YouTube making Lego "Brickfilms", in which he uses Stopmotion with Legos. An example is his Lego Superman ALS Ice Bucket Challenge[1], where Superman does the ALS Ice Bucket Challenge after being nominated by the Avengers. In real life, Jordan was challenged, but he didn't want to pour ice-cold water on himself. Still wanting to participate for charity, however, Jordan decided to make the Superman Brickfilm.

Jordan also makes custom Lego Minifigures. Often, Jordan will make minifigures based off of Marvel and DC Superheroes, such as Iron Man and Captain America from Marvel, and Superman and Batman from DC.

Jordan has also made minifigures for Brony Analysts, including Josh Scorcher, Dr. Wolf, and GoldenFox. 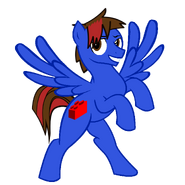 Add a photo to this gallery
Retrieved from "https://the-rift-cafe.fandom.com/wiki/BrickBrony1894?oldid=11037"
Community content is available under CC-BY-SA unless otherwise noted.