The Rift Café Wiki
Register
Don't have an account?
Sign In
Advertisement
in: Unicorn OC, Female, Artists,
and 3 more

Bright Idea is a blue unicorn who loves coming up with creative ideas for parodies, puns, and fanart that'll make her and her friends smile. She has a bright, optimistic personality and always sees the best in others.

Though she's been a fan of the My Little Pony: Friendship is Magic fandom since the second season, she only started contributing to the brony fandom since February 2015. Her first pony-related parody was "Kung Pony: Enter the Hoof", and it was uploaded to her first YouTube channel, before she created her Bright Idea channel. This video got over 250 views in the first day, and after feeling the high of sudden popularity, decided from then on to keep making Pony videos.

The light bulb + computer-mouse cutiemark on her flank represents her love of all things related to computers and her dream of making the world a brighter place with her ideas.

Personality: Being a mixed breed, she shares different traits with her parents, good and bad.

Like her dad Big Ben, she's down-to-earth, loyal, practical and always eager to learn new things, but she can also be very proud and stubborn, only giving in after she realizes she was wrong about something.

Like her mom Silver Song, she's creative, musical, and can use her magic for making things, but sometimes her perfectionism can get the better of her and she often goes through phases of super-productivity followed by periods of brooding introspection, wondering just what her direction in life should be.

Loves: Her specialties are editing videos, creating digital art and creating websites. She enjoys watching movies, reading books, listening to music, playing piano, hanging out with her friends, going to the beach, and stargazing. She also loves hanging out with babies or young ponies, and knows that children can learn a lot more than people give them credit for.

Friends: Besides her sister Magenta Plume and her brother Up'n At'em, she has a unicorn friend named Pop Quiz, who dreams of becoming a teacher and has a cutie mark of a pile of books with a globe behind them (based on one of my real friends)." 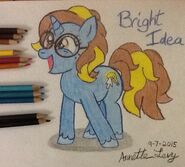 Art by Brighty herself 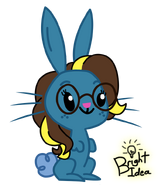 Bright Idea as a bunny 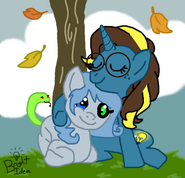 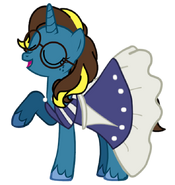