The Rift Café Wiki
Register
Don't have an account?
Sign In
Advertisement
in: Male, Unicorn OC, Alphabetical,
and 2 more

Before discovering the Analysis Community, Ewan Wallace was a simple minded unknown Brit who was into Doctor Who. In January 2013, he watched the PONY.MOV series, and eventually became a brony after discovering Friendship is Magic, the show PONY.MOV was based on. Later on, Ewan found a couple of analysts, and became hooked on reviews.

After some development on his character, 'British Brony's first review came out in April 2014, and he has continued to make reviews ever since. He joined the Rift Cafe in December 2014, after 5 reviews and an Editorial, and collaborated with some of the bronalysis community, including AntonyC, Voice of Reason, Keyframe, and many more!

As quoted from Brit's OC Backstory Commission which he commissioned from Sparkle Chord:

“This is Crimson Blaze, a local artist currently residing in the own of Ponyville. Born and raised in Canterlot, he got his cutiemark at a young age after realising he could create great artwork with the magic in his horn. He was ultimately inspired, in his first ever drawing, by the Summer Sun Celebration and the sun rising high in the sky. He continued to live in Canterlot for a few years, offering services as a freelance portrait artist before moving to Ponyville, where he now not only draws his fellow ponies, but also some of the dazzling sites around him.

Crimson is a kind, friendly pony, as well as creative and, deep in conversation, a bit funny too. Although his art isn't the greatest in all of Equestria, ponies who commission him are happy enough with the results.

His horn is the key to his art, its levitation magic allowing him to 'hold' his pencil/paintbrush when drawing. Unlike most ponies, while he does reside in Ponyville, he has never interacted with the so-named 'Mane 6' in their adventures, though he may have once or twice drawn a couple of them in business terms.”

BB gains wings and a cane in his intro

Brit's cameo in The Shipping Game

British Brony as seen in his animated intro, wielding a red gun yet to be seen outside of the intro (animated by ToucanLDM) 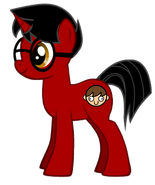