BronyMaster first created his channel in August of 2013 under the name "RainbowDashDealWithIt" for simply browsing MLP videos. He changed it to BronyMaster in September of 2013. He began making videos in the first half of Season 4, and made videos almost every week for the rest of the season. He joined the Rift Café in January 2014, and collaborated with Storm Analysis on "Leap of Faith". He was also in the Crepuscular Bronies Discuss podcast #66 with Silver Quill for the same episode.

His first video MLP:FiM S4E5 "Flight to the Finish" and Season 4 RANT by BronyMaster was uploaded on December 15th, and was a quick, unscripted rant. Another review about the episode "Bats!" was uploaded later in the month, yet both videos did not successfully upload.

Art made by Hoodwink MLP on Tumblr 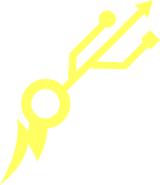 BronyMaster's Cutie Mark (as of season 5)

BronyMaster's original cutiemark
Add a photo to this gallery
Retrieved from "https://the-rift-cafe.fandom.com/wiki/BronyMaster?oldid=11437"
Community content is available under CC-BY-SA unless otherwise noted.