Byter does written reviews of MLP:FiM (and other random topics) on his DeviantArt page. He is also the host of the Crepuscular Bronies Discuss (CBD) and he produces various other video content on his YouTube channel.

Byter started writing written reviews to mostly just practice his English and he started the CBD with AnY Pony as a way to additionally discuss the show. He loves debate and he is best known for his generally negative views of the show and his eagerness to debate it (most often during the CBD or in his comments sections).

Byter takes little influence from any source for his reviews, videos and podcast. His first review was little more than just a list of points with points listed from those points. Over the years he has changed from that formula to a much more long winded and thorough approach. This can be most typified by his 20 part review of Sleepless in Ponyville (Byter's bits) which will be around 2 hours long. He hardly takes place in any collabs, he doesn't use a pony OC for his videos and he doesn't have a 'review-canon' for his OC.

Byter with an alternate design by LethalAuroraMage. In this form he is known as Tardon 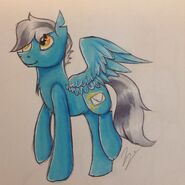 Byter and Sweetie Bloom being shipped
Add a photo to this gallery
Retrieved from "https://the-rift-cafe.fandom.com/wiki/Byter?oldid=11438"
Community content is available under CC-BY-SA unless otherwise noted.