The Rift Café Wiki
Register
Don't have an account?
Sign In
Advertisement
in: Alphabetical, Bronalysts, Male,
and 4 more

Thespio (originally missoliverandblossom) came in at first through a circle of friends consisting of Jasper Pie (originally trainlover476) and ToonKriticY2K (originally FlameAmigo619), as they did comical dubs for Thomas The Tank Engine episodes, and even with playsets of the franchise, as ToonKritic idolized him and Jasper to where they made each other popular, welcoming them into the Brony Analysis Community.

Thespio, as the name suggests, is good at entertainment. He has a bit of an egotistical side and, according to Keyframe, is 'the size of MLP-Silver-Quill's losing streak in TF2 Analysis', and that it causes him to commit bad things if nobody indulges in it. He is capable of doing impressions fairly well, which is what fits in his role as the TF2 Blue Spy. He can be very hilarious when it comes to entertainment. However, he can also be very supportive.

Thespio is also very excitable, and can be very giddy at the most stunning of sights, and easily angered Lightning Bliss with his wonky reaction to the episode Crusaders of the Lost Mark. He goes hysterical when it comes to things he finds addictive, exciting, and fun, such as being the TF2 Blue Spy to where he attacks his own team members. His mental stability is rather ranged, and his mood swings are very apparent, whether it be aggravated, questionable, disgusted, amazed, or overjoyed. 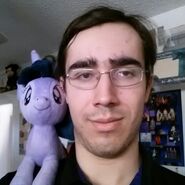 Will in real life 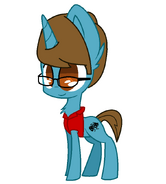 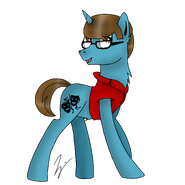 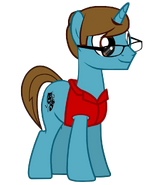