Darksteel was created to be the ultimate hybrid. His creator is unknown. What he's hybridised from is unclear. He was trained to weld the dark star saber, which he can summon with his magic helmet. How he or where he got this is also unclear.

He was ordered to terminate everyone in the Rift Cafe but the ponies there convinced him that there was another way and that he had the choice to make a new path in life and to do other things than what he was created for. Whether he accepted or not is not entirely clear.

Darksteel is normally nice and calm but he sometimes has a bad temper, so he likes to travel to keep a cool head. When he gets angry and fights he gets very serious and focuses on the fight, instead of acting cocky. Sometimes he becomes too angry and loses control of himself and becomes likely to blast anyone who messes with him. 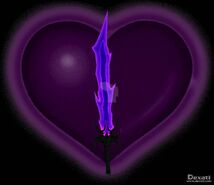 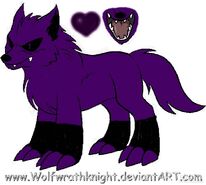 One of Darksteel's forms: Fang the purple wolf
Add a photo to this gallery
Retrieved from "https://the-rift-cafe.fandom.com/wiki/Darksteel_Ultimate?oldid=16677"
Community content is available under CC-BY-SA unless otherwise noted.