Drowning In Horseshoes was a notable reviewer in the brony fandom, mostly for his "Horseshoe reviews" series which primarily covered season 4 of MLP:FiM. His approach to reviews was very unique, but often times not well received. While his critique was usually very well thought out, rational, and in-depth, his often satirical use of insult humor garnered mixed reception from the fandom. So far he has been one of the only reviewers to utilize an over-arching narrative for his persona, "Horseshoe man", being a parody of bronies, and his alter ego "Colt Corona", a Jekyll and Hyde type persona of Horseshoe man.

On June 6, 2015, Horseshoes announced the Horseshoe Reviews series would end. He released an almost 2 hour long video titled "Horseshoe Finale" about his departure, among other meanings with more depth, which sent out mixed signals to the fandom. Some reacted with pleasure, others with regret, bitterness, or confusion. It served to close all of the loose ends to the overarching narrative of his channel, while to also reveal his intentions and motivations for beginning his channel in the first place.

Drowning in Horseshoes has recently renamed his channel to Manchild Inc. The purpose for this channel is a parody of sellouts and the act of selling out, but it was mentioned in an update video that he may be covering My Little Pony again in the near future.

A portrait of Jesse in real life. 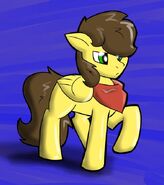 Add a photo to this gallery
Retrieved from "https://the-rift-cafe.fandom.com/wiki/Drowning_in_Horseshoes?oldid=13058"
Community content is available under CC-BY-SA unless otherwise noted.