The Rift Café Wiki
Register
Don't have an account?
Sign In
Advertisement
in: Alphabetical, Male, Unicorn OC,
and 5 more

Commander Firebrand (or Joshscorcher, or The Fiery Joker...or simply, Josh) is the commander of the Equestrian military base F.O.B. Equestria. And a commander of the royal guard. Firebrand is famed for his love of all things fiery and explosive, as well as his 'super serious' demeanor.

Firebrand, as the name suggests, is knowledgeable of fire spells, but also has a temper on him. As a fictional and nonfictional marine, he has a great knowledge of military etiquette, and his most hated quality is how much the Equestrian Military is portrayed as incompetent, founding FOB to show otherwise. He can be easily frustrated, he can have raging anger issues, and he responds violently to aggravating situations, and attacks people like MLP-Silver-Quill, ILoveKimPossibleAlot, to name a few, when they make a wrong move. For example, calling him an army pony when he's supposed to be of the Navy; or by just cracking derogatory puns.

He is also a bit of a showoff as he can crack jokes of his own, and references things like abridged jokes from TeamFourStar, Family Guy, and so on. He can also be a good leader when given the chance, especially when DRWolf001 left him in charge of protecting the TF2 Analysis Community from DustyKatt and the rampaging robots. He can be dangerous to be around at times because of his explosive personality, but he can be very heart-warming at the same time. 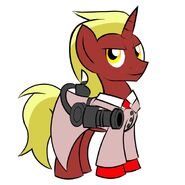 Commander Firebrand as the Medic in "Analysis Anarchy" Series

Firebrand and Inkrose with their children Morning Shine and Citrus Blossom. Art by Ink Rose herself. 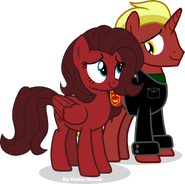 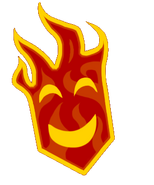 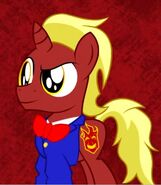