For Shits & Giggles is a Live stream produced by ComicSansPony

For Shits & Giggles, A.K.A. 4S&G or Fo Shiggles, was conceived in a late night call in The Rift Café that had ComicSansPony, cAPS lOCK, and Robin0928 in it. cAPS had Robin look up a game on steam called "to the moon." For some odd reason Robin found "Putt-Putt Goes to the Moon" and begun reading off the outdated descriptions for all the Putt-Putt games. They all found it increasingly hilarious that Robin was awful at articulating alliterations. Eventually the suggestion came up to do let's plays of the games. Comic volenteered his Twitch channel as tribute. Unfortunately, cAPS had to drop out of the project and so he was replaced by Starlight pony.

The Name came from Comic thinking "Why are we planning to play these games?" and his responce to himself being "For shits and giggles of course!"

After the original run ended due to schedule conflicts a few months passed and the show seemed dead, but then Comic got bored and revived it as a regal game stream with Fallout 3. He has gone on to play games almost weekly, but at irregular times (usually around 2-3pm EST).

After having more streams uploaded in a year than actual reviews, For Shits & Giggles has moved to Comic's other channel [Aptly Unnamed] Productions. 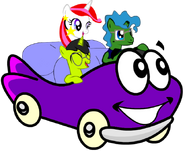 For Shit & Giggles' Putt-Putt Saga art commissioned from Blissy
Add a photo to this gallery
Retrieved from "https://the-rift-cafe.fandom.com/wiki/For_Shits_%26_Giggles_(Live_Stream)?oldid=13728"
Community content is available under CC-BY-SA unless otherwise noted.