Long ago, before the rule of Princesses Celestia and Luna, the draconequus Discord created chaos and disharmony throughout the land of Equestria. It rained chocolate milk from cotton candy clouds on a daily basis, hideously colored thunder crashed into mountains of cheese and ponies of all shapes and sizes literally became all shapes and sizes. Ponies fled to all parts of the world, though many started to recolonize on a small unknown island to the far east. This became the Island of Sciencia, as the majority of the refugees were scientists, surgeons, and even some engineers and mechanics. The Era of Chaos continued for many years, as did the progression of Sciencia. It's industrial prowess was far advanced beyond it's years thanks to scavengers and traders bringing in foreign equipment from other lands, as well as finding random objects strewn about the ocean and mainland. Because of this massive increase of technology and industry, ponies began running experiments on their own kind to both scientifically and mechanically alter themselves and become the physical and magical equivalent of Alicorns in order to take down  the tyrant themselves.

One such scientist from this island was Gear Grinder. After running into multiple conflicts with his morality and harming others, he began running experiments on himself. While he was unable to achieve Earth Pony strength through gene splicing, he was able to attach enchanted mechanical wings into his spinal chord in order to achieve flight. Though in order to achieve this nearly impossible feat, he had to tap into a certain branch of magic forbidden by any sentient being that wished to retain their sanity: chaos magic.

Though Gear Grinder was able to achieve what no other scientist or engineer had done before, this was a double edged sword. During the pinnacle of his triumph, the bane of his peoples existence appeared before him in order to "congratulate" him on his success. Discord allowed the young Unicorn to retain his wings, though he inflicted a curse on him far worse:

"Until the day that Chaos is tamed,"

"You, dumb genius, will remain the same"

"You'll not age a day, but those you love will"

"Time for them is fleeting, but your time stands still."

"Chaos will seize their genius minds"

"War will consume them; it's almost a crime!"

"You'll bring nothing but death to all you are near."

"I must leave you, you nerd. Enjoy all of your years!"

With a puff of smoke that smelled like a strange combination of Daffodils and wet dog, Discord vanished. The curse was true to it's disturbing word: Sciencia did eventually crumble into ruin as ponies began fighting amoungst themselves with robotic attachments and many alternative varieties of magic. The only survivor of the carnage was Gear Grinder, much to his dismay.

Any town that Gear Grinder tried to go to and make his home, nothing but chaos and death followed him for many, many years. He eventually became the pariah of all of Equestria, which drove him to go into isolation inside of a cave in the Everfree Forest. He cast a sleeping spell on himself that would last for over 1,000 years, in hopes that doing this would prevent any further deaths to anypony he came across.

Gear Grinder awoke to the sound of something faling to the ground. A dragon had recently taken shelter in the cave he had slept in for over a millenium. After speaking with this dragon, he found out that Discord had been reformed by someponies called The Bearers of the Elements, and Princess Celestia and Luna were now the rulers of the land once more. This, in turn, meant that the curse placed upon him all those years ago was finally lifted. While this relieved Gear Grinder greatly, he still fears bringing pain to anypony that may come close to him. He's built his own workshop deep with the Everfree Forest, so that way he might never harm anypony for any selfish reason ever again.

Gear Grinder is, for the most part, a total social recluse. He very rarely leaves his little ramshackle laboratory in the Everfree Forest, only doing so to scavenge for parts and look for food to eat. He very rarely does he interact with ponies, though usually limiting himself to short sentences. He often times comes off as rude and stand-offish, though nopony has ever actually had a chance to get to know him well enough to say for certain. It's best not to ask him about the past, as he'll only get upset and not speak to you for a very long time. He's also often seen looking at old books that have withstood the test of time for who knows how long. What they hold, nopony knows.

Being from an older time period, he has much older tastes compared to modern ponies. He regularly listens to old vinyl records on his phonograph, and has very little to no idea what kind of music exists today outside of classical pieces. He favors old gadgets and steam-powered engines over electric appliances, though he still uses it to power his lights and ventilation systems.

He's always seen wearing a vest and some strange jumpsuit like garment underneath. He always has a wrench in his back left pocket, just in the event he needs to repair or dismantle something. His magical aura has been permantley altered by chaos magic, making it appear like boiling blood. It's stronger than most magics, though it comes at the price of Gear's sanity. If used for too long or too heavily relied upon, Gear goes into a mental relapse and may violently attack anypony near by as he fights some unknown mental nightmare.

Recently his physical body was irreparably damaged, and the copy of his consciousness he recently put in to his new computer took into effect and is active today. He now "lives" in his computers hard drive and will occasionally pop up on other ponies computers by means of Internet travel.

Around the year 2011, I started to play the first person shooter game Team Fortress 2 when it first became free to play. After playing it for a few months, I encountered a group of people who I became friends with as we regularly played CTF maps. One day, while running back to my base as the Scout class, I saw that one of my friends had put a spray of Rarity on a wall. Not knowing nor caring what it was, I continued running. Along the way, I saw two more sprays, each of them containing some in-joke about the show that I did not yet understand. After winning the game, I spoke to them about what exactly this was about. They told me they were "Bronies"; grown men who enjoyed watching the show My Little Pony: Friendship is Magic. At first, like many, I did not take this seriously nor give it any second thought. After going to a few pony related maps after that discussion, I actually researched what it was to "be a Brony".

Of course, the internet being the "oh-so-welcoming" resource that it is, I encountered flame wars, arguments, Fox News coverage and all sorts of bizarre images. For the longest time, the concept of this perplexed me; grown men with jobs and social lives that enjoy watching a cartoon intended for young girls? Like any logical person, I began watching it from the first episodes to get an understanding of it, then the next few after that. At the time, I didn't find anything overly interesting about it and dismissed it. Ironically enough after that, I began to watch classic Cartoon Network shows such as Dexter's Lab, Johnny Bravo, and Courage the Cowardly Dog. Then my eyes fell upon one show that I had not only embraced as a part of my childhood, but it was one that I had watched almost religiously growing up. The Powerpuff Girls. The sheer irony of the realization made me go back and watch more episodes of My Little Pony. Eventually, I found myself greatly enjoying the characters, the setting, the lore, the plots, and more.

It was around this time that I joined a government program called the Job Corps, which is an institution meant to train young people to a trade of their choosing. I was in this program for about three years as a chef before I completed my training in February of 2015. After all that time away from home, friends, and the internet, I was eagerly wanting to watch MLP again and catch up on everything I had missed. While browsing through episodes, I came across well-known members of the Brony community such as Dr. Wolf, Silver Quill, ToonKriticY2K, Keyframe, and so on. From watching them and from actually looking at a critical standpoint as the show, I started creating my first analysis video titled "Reel Revivial: Friendship is Magic Part 1". From there, I've gone far beyond what I thought I was capable of. I've done many voice acting jobs, made many associations that will last for a very long time, and I've started to gain interest in becoming a member of the Rift Cafe. 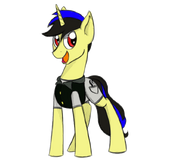 Made by xXMarkingXx
Add a photo to this gallery

More will be added soon, if I can figure out how to put in the correct format for pictures.

Retrieved from "https://the-rift-cafe.fandom.com/wiki/Gear_Grinder?oldid=15819"
Community content is available under CC-BY-SA unless otherwise noted.