Gibbon first started getting attention in the pony fandom with his compilation videos, where he would find any utterance of a certain word in the show. These videos also got the attention of Digibro and Drowning In Horseshoes.

Inspired by those two Gibbon started doing analysis videos. They were rather unique when compared to other analysts, thanks to his humor and editing.

Through these videos he became friends with other analysts such as Tommy Oliver, TBBBAP and Lethal Aurora Mage.

On December 13, 2013, Gibbon released the first episode of Analysis Assemblage. Where he would compare and analyse the points made by fellow analysts. Each analyst had there own unique head shot drawn for the series.

Starting from Pinkie Apple Pie, he focused on his series Gibbon’s Take. Where it would focus on his personal opinion on an episode. And here is where the Gibbontake style really developed. With videos usually going off the rails at one point or another.

Towards the end of the series‘ run he did whatever he wanted with the reviews with no real format. Like the Trade Ya review being done in the style of TBBBAP, most of the For Whom The Sweetie Belle Toils review being a rant from Drowning In Horseshoes, and the Inspiration Manifestation review being absolute nonsense.

His review of the Season 4 finale was a lot more grounded and featured way more live action. Acting as a precursor to the Hippocrit videos.

After losing interest in reviewing My Little Pony, he released a video announcing the HippoCrit channel. This channel featured comedic reviews and analysis of video games, mainly ones from the PS2 era. These reviews featured him talking in front of a camera rather than behind an OC. At the end of 2018 he discontinued the HippoCrit channel to focus on other ventures in music and comics.

The original Gibbontake channel is now used to post random videos, whether they be short animations or little rants. 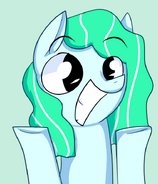 An animated gif by Tobbby92

Art by TakaraPOV
Add a photo to this gallery
Retrieved from "https://the-rift-cafe.fandom.com/wiki/Gibbontake/Hippocrit?oldid=16271"
Community content is available under CC-BY-SA unless otherwise noted.