The Rift Café Wiki
Register
Don't have an account?
Sign In
Advertisement
in: Pegasus OC, Alphabetical, Female,
and 2 more

Has no official name, but she says that it would probably be "KP".

Uploads a new video every Thursday.

Kim is a pegasus pony known for her eccentric and exciting personality. Her outbursts of emotion are best described as spontaneous yet well timed for comedic effect. Fan fiction writers often give her a more adventurous personality thanks to her namesake. It is common to find Kim as an adventurer, soldier, spy, or other rough and tumble type of mare in the many fan fictions she has appeared in. She is also talented in stealth training and the use of gadgets due to her likeness with the other Kim Possible.

Kim is very excitable, and very eccentric. She is famously known for being a huge fan of Discord, calling herself 'The Discord Princess', and gushes about the character a lot. Though she says that she doesn't like him to an extreme as she balances it, but still keeps her fascination with him to a degree.

Kim is also a very big showoff and an easily-aggravating person, not doing well when becoming the TF2 Blue Scout as she shows off and gets herself killed many times, until she discovers that she can provide a different purpose by 'annoying the living daylights out of people'. She takes even the most inappropriate time to crack jokes and memes on a regular basis, and even teases her friends a lot. 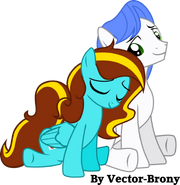 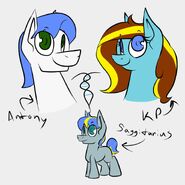 If Antony and KP had a child... 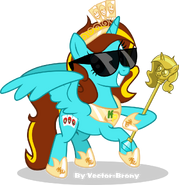 KP as an alicorn princess by Vector-Brony 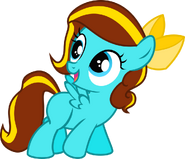 KP as a filly

KP and Riquis101 are close friends, and Rio even design most of KP's OC.
Community content is available under CC-BY-SA unless otherwise noted.
Advertisement