The Rift Café Wiki
Register
Don't have an account?
Sign In
Advertisement
in: Alphabetical, Active, Male,
and 3 more

"Who Better to Cook a Pie THAN a Pie?"

Jasper Pie is not an official member of the Rift, but is a longtime friend of Toon and Thespio. The three met in the late 2000s; before joining the Brony fandom, they were members of the  Thomas & Friends fandom, with Jasper (known at the time as trainlover476) making his own comical episodes using the battery-powered toys made by TOMY and later Fisher-Price. They frequently collaborated on various Thomas-related projects, such as redubs of Thomas episodes. Jasper and Thespio were working on a crossover of their Thomas series (Thespio used Bachmann models) known as Tomy T&F, which was cancelled after the two moved on to the Brony fandom, eventually being released in a rough form in 2017.

His contributions to the Brony community include acting as audio editor for the Analysis Anarchy series along with Thespio, making comics on his DeviantArt (Either about his comedic life or relating to the Analysis Anarchy series), and his prank call videos: where he receives phone calls from other bronies in the community (Such as Lightning Bliss, Firebrand, and Sapphire Heart Song, as well as CarToonz, Toon's evil-turned-edgy alter-ego) with food orders, and hilarity usually ensues. He also claims credit for bringing GoldenFox and Keyframe together (really, all he did was shout "Oh, will you two just f*** already?!").

One of his first appearances was helping Thespio teach Lightning Bliss about the magic of the theatre.

He first met Thespio's fiance, Midnight Sonata when Thespio was showing her around PonyVille, and the three banded together to make the ultimate pizza monstrosity.

Today, Jasper still occassionally ventures back into Thomas, most recently to call out the PC movement; many projects he has edited also uses quite a bit of Thomas music. He is also working for WatchMojo.com, and is dating Harmony Dancer aka DragonFirePrincess7.

As his name implies, he is a member of the Pie family; more specifically, he is a distant cousin of Pinkie Pie.

Jasper lives in Ponyville, and owns a pizza restaurant known as Pie's Pizzeria, where he lives with Harmony Dancer, his loving Aunt Canneloni, and his alcholic, paraplegic, chronically-lazy, verbally abusive Uncle Fettucini.

On April 13, 2019, he was hired by Firebrand to provide catering for the staff of FOB Equestria after their collab review of "Marks and Recreations". 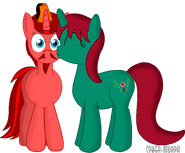 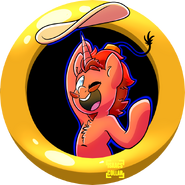 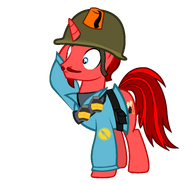 Jasper as the Blu Soldier (Vector by Lightning-Bliss) 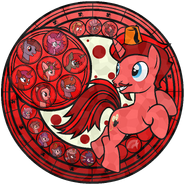