Keeneye47/Wolfkeen began his channel back in 2009. He started doing videos of the game Blockland. In 2011, he began to do gameplay videos of various games (At first with a webcam, before he finally bought a capture device.) In 2013, Wolfkeen found out about the analysis community by watching one of Digibrony (now know as Digibro)'s videos. This led to him becoming more interested in the community. He joined the Rift Cafe, not long after he began to do vlog-style videos of the show My Little Pony: Friendship is Magic.

Since then, his channel has been home for gameplay and vlogs.

As of 2017, Wolfkeen has split his content among three different channels. His main channel, where he does reviews and discussion. (Along with a few random videos) A gaming channel, which is now the home for LPs and the like. And a stream archive channel, where he uploads previous streams and highlights.

He has also opened himself up as a freelance editor, taking editing jobs for a variety of different people within the community. (NickyV, Heartsongpony, etc) 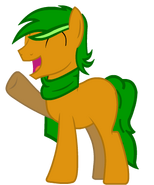 Keeneye wearing a scarf for the winter seasons

Keeneye with his adoptive mother and father

Keeneye as a pointy pony

Keeneye as a chibi pony
Add a photo to this gallery
Retrieved from "https://the-rift-cafe.fandom.com/wiki/Keeneye47/Wolfkeen?oldid=14739"
Community content is available under CC-BY-SA unless otherwise noted.