The Rift Café Wiki
Register
Don't have an account?
Sign In
Advertisement
in: Alphabetical, Female, Unicorn OC,
and 5 more

Originally providing title cards for AnY, she joined the Brony Analysis Community later on, and earned the eye of GoldenFox, and after reviewing Hearts and Hooves Day with him teasingly after learning of his crush through her magic, the two became a couple.

Keyframe is very sympathetic, bold, determined, and willing to stand by anyone side if they need aid, helping GoldenFox get over his haunting anger issues when they end up giving him bad dreams while reviwing Do Princesses Dream of Magic Sheep. She is very tall, and as such, she occasionally gets taken less seriously for it by even AnY in a same way to Lightning Bliss' cuteness problems. She can be pushed to her limits very easily, and is easily peeved at annoyance.

The Brony Gallery (2015- ) In this series, Key takes an in depth look at a particular artist on DeviantArt, choosing 3 of their particularly great images and analyzing each one on its own. Currently, she has only done two episodes of the series, but has plans to do more.

The Ask Series (AnY as host 2013-2015) (Keyframe as host 2015-) Taken over from AnY, Key is told she has to preform the duties of the former host by asking questions for the audience to answer in the comments.

AnYKey art by Key herself

A scene from Goldenfox has a Crush on Keyframe 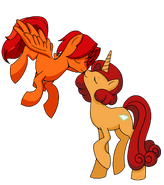 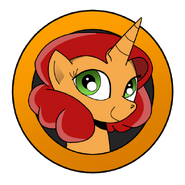