The Rift Café Wiki
Register
Don't have an account?
Sign In
Advertisement
in: Alphabetical, Active, Voice Actors,
and 5 more

We at the Rift know that people are mad with the following users. You are welcome to comment what you believe below but note 'trolling' and 'harrassment' is not tolerated on this site.

once a week
Lone Brony is a semi-active member of the rife cafe. While he is not an analyst (being a musician), he does admire there work. Lonebrony originally had any other YouTube channel that was inactive, when he and a bunch of friends started thinking on make content for the brony fandom, instead of using Lone's old channel, everything was built all over again, the new channel was named lone Brony (a sort of pun because the group was made up of 8) and was changed to LoneBronyProductions (history here) due the name sound more professional. LoneBronyProductions was originally created, as a channel which would do animation, analysis, comic dubs and music. Lone Brony joined The Void Outpost a few months after starting his current YouTube. On the 19th of February, the channel was hit with it's third copyright strike, leading to it's termination. The first two strikes were from the artwork used in the Videos, even through they were both fair use. The third came because of the actions of Jackie a group member, who was caught plagiarising, it is unclear how many of the 52 songs on the channel, were by Jackie. The lonebrony team is deeply sorry to all those affected, all copyrighted content has been removed and apologies has been sent out (Please note, some original musicans could not be found). Due to the controversy surrounding this Ryan have since distanced themselves with parts of the fandom 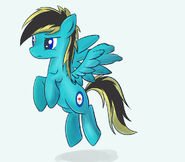