We at the Rift know that people are mad with the following users. You are welcome to comment what you believe below but note 'trolling' and 'harrassment' is not tolerated on this site.

LoneBronyProductions was created on by LoneBrony (Ryan.H.C) officially on June 11th, 2017. The name funnily enough was not after Ryan (he adopted it later) but was instead was a pun as the group was made of up of 5 members (later expanded to 8 members and 4 unofficial members, though commonly mistaken as one person). The groups purpose was to show Animation, Art, Music, voice acting (comic dubs) and updates on a game some members were working on. The member quill would leave not long after the creation of the group due to time constraints. The group would continue to make work until early September of 2017 were a dear member of the group would sadly pass. Everything that involved him, which included animation and comic dubs was permanently put on hold, out of respect. The group would then begin to seperate over the next few months due to the until it was only made up of 3 members (MadKing, LoneBrony and Jacomics & Art) by the end of December 2017. During this period LoneBrony would joined The Void Outpost. On the 19th of February 2018, the channel was hit with it's third copyright strike, leading to it's termination. The first two strikes were from the artwork used in the Videos, even through they were both fair use. The third came because of the actions of Jacomics & Art, who was caught plagiarising from musescore.com (discussion were things are clarified can be found here), it is unclear how many of the 52 songs on the channel, were by Jacomics & Art. The lonebrony team is deeply sorry to all those affected, all copyrighted content has been removed and apologies has been sent out (Please note, some original musicans could not be found). Due to the controversy surrounding the group, Ryan and the mad king distanced themselves from parts of the fandom for some time until creating the current channel.

(The 'original music' list have now been completely removed and all 52 songs are beinteresting reviewed.We apologize for any inconvenience this may cause.To view some of music that was plagiarized, you can visit musescore.comand search Celthyan, Lizzapie, Robin M. Butler, mnmwert and Rebecca Y. ) 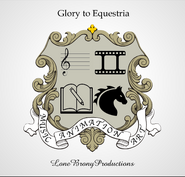 Add a photo to this gallery
Retrieved from "https://the-rift-cafe.fandom.com/wiki/LoneBronyProductions?oldid=16416"
Community content is available under CC-BY-SA unless otherwise noted.