The Rift Café Wiki
Register
Don't have an account?
Sign In
Advertisement
in: Unicorn OC, Male, Alphabetical,
and 3 more

[My Little Pony 1]My little pon

Minty Root is a show style fan animator and 3D animation student, mostly known for his work on Project Thundercloud I, II, and Dinky's Destiny, a 45 minutes long fan film about Dinky Doo and Princess Luna in an adventure to find her true destiny.

His OC is a unicorn mare raised in a pegasus family, with a talent for writing and studying spells, but physically unable to cast powerful ones. Contrary to his online name, his OC's name is Minty Quill.[1]

Minty found about the fandom from a friend who knew about the show, as he realized the show was done in Flash and he knew how to use the software he decided to try his luck at fan animation, getting himself a panel at BronyCon 2013, before even doing his first fan animation. His very first brony project was Call of the Storyboard, a quick animation test based on a storyboard from the show, followed two hours later by the 2013 version of Project Thundercloud. 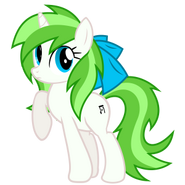 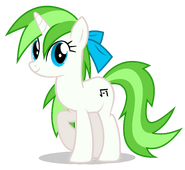 Most recent design of Minty Root, featuring a cerulean bow. 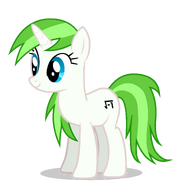 Original concept, based on Derpy Hooves and Rainbow Dash 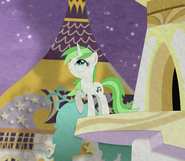 Minty Root, as seen in the credits of Project Thundercloud II

Cite error: <ref> tags exist for a group named "My Little Pony", but no corresponding <references group="My Little Pony"/> tag was found, or a closing </ref> is missing