Kirsty began on YouTube in 2009, she was convinced by a personal friend to start making video game music videos, since she loved gaming (especially Final Fantasy). This is how her username MoombaTroopa came into being. For the first few years on YouTube that's all she did.

It was some time in 2012 that she got a glimpse of My Little Pony: Friendship is magic by randomly finding ACRacebest reaction videos. Despite returning to these multiple times she didn't watch any episodes of the show. It wasn't until around a year later that she found BronyCurious and Digibrony's analysis videos, that she decided to start at the beginning of season one and watch all the episodes at that point.

From Season 3 onwards she consistently kept up with show and began watching other analysts such as Antony C, ILoveKimPossibleAlot and eventually TBBBAP. She was tempted to be begin making pony videos of her own but decided against it since she didn't have good enough microphone and at the time no pony OC, but mainly confidence issues held her back. It was only until Season 4 of MLP began that she finally decided to draw up a pony OC for herself.

It was during 2014, while Season 4 was airing that ILoveKimPossibleAlot released a video hiring editors. Since Kirsty was at the time doing Media in College and had began YouTube making music videos and thus already had a bit of editing experience, she decided to apply to Team KP as an editor. She worked with Team KP for around a year and became friends with many great people including the more well known Vector Brony. Being in the team helped boost her confidence and also encouraged her to begin making more pony related art.

It was during the time when KP began hiring more editors that she met Ben Stock aka ComicSansPony. He mentioned wanting someone to draw his OC so Kirsty offered to make three drawings for him. This sparked the long line of commissions that resulted in Kirsty becoming one of ComicSanPony's main artists for his new MLP Comic Reviews.

Currently Kirsty has decided not to make any pony reviews or analysis videos and instead intends to focus on her love of games which is what her channel was born from in the beginning. However she still has a couple pony related videos planned but they may take a long time to appear. She still very much enjoys drawing pony related pictures and these will still be frequent on her deviantArt.

Eclipso was born on a continent outside of Equestria and the rule of Celestia and Luna. She lived with her mother and father and also has an older sister and even older brother. Her ambitious older sister was the first in the family to go to Equestria and make a life in Manehatten. Curious about the world of Equestria Eclipso decided to go on a journey to discover the world.

Eclipso was born with a condition in her head that caused her to grow two unusually shaped horns. Her mother believes it came from her grandmother who was also born with two extra front hooves. Because of her horns, Eclipso has double the normal amount of magic that the average unicorns have, however this caused many problems while growing up as she suffered from migraines and found it hard to control the strength of her spells and emotional outbursts could have explosive consequences. With a lot of training and after growing into a young mare she finally began to control her magic more easily. She learnt a technique of letting any excess magic leak from her horns in a harmless flow to keep it at a controllable level and drinking tea to soothe her head.

Once she became a fully grown mare, her parents gifted her with a tail clip, a family heirloom that from that day onwards she used to plait her tail with. The tail clip also has magical properties but they are not all known.

On her journey, Eclipso travelled wearing a large pointy hat and cloak to hide her horns, she was afraid of being mistaken for a changeling as has happened before due to the unfortunate combination of her horns and black colouring.

Eclipso found it hard to interact with other ponies as she is painfully shy and only tends to speak to others when spoken to. She has a fascination of all other species, not just animals but dragons and griffins est. This can sometimes be a detriment to her as she has occasionally put herself in danger because of her curiosity. She loves to draw but has no desire to be better than other artists, this may be because of a lack of confidence but it is also partly because she likes to draw for fun and doesn't like the idea of making a fun activity straining.

Eclipso is also known to be a bit of a hoarder, finding anything shiny or cuddly she has a secret cave that she uses to store anything interesting within, protected by magic. Eclipso has a few very close friends but is also very solitary and enjoys time alone occasionally. 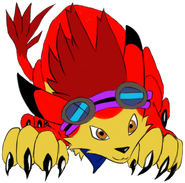 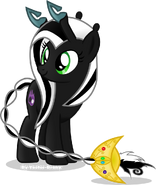 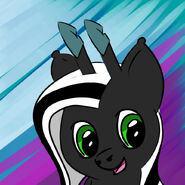 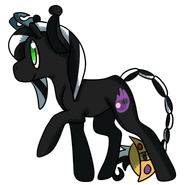 Angry Eclipso Profile Picture
Add a photo to this gallery
Retrieved from "https://the-rift-cafe.fandom.com/wiki/MoombaTroopa/Eclipso?oldid=13064"
Community content is available under CC-BY-SA unless otherwise noted.