Phantom Horn or Ben Saint is one half of the YouTube channel TBBBAP. After years of being apart of the My Little Pony community he departed from the community and the TBBBAP channel to start his own channel Ben Saint he is also the owner of Saint Comics.

Two Best Brothers Bitch About Ponies, or better known as TBBBAP, is a web series run by Phantom and his brother Keg Standard.

The Pro Crastinators Podcast is a podcast consisting of the previously known Horseshoe Crew and a few other members such as Munchy and Mumkey Jones.On this podcast they discuss many random topics ranging from sleep habits to the color yellow.

On an episode of the sub-series Rowdy Fuckers Cop Killers, after playing Frog Fractions, Ben Saint and Munchy went on a tirade, calling out many members of the pony community and airing grievances. 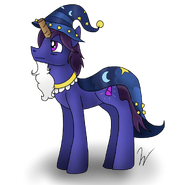 Phantom has a head-cannon that he is Starswirl the Bearded 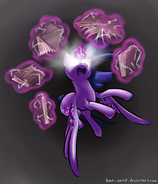 Art of Twilight by Phantom
Add a photo to this gallery
Retrieved from "https://the-rift-cafe.fandom.com/wiki/Phantom_Horn?oldid=16716"
Community content is available under CC-BY-SA unless otherwise noted.