The Rift Café Wiki
Register
Don't have an account?
Sign In
Advertisement
in: Alphabetical, Male, Artists,
and 5 more

Phoolery is a Party/Jester Pony, who's been "contained" inside "The Void." Yes, that void. As to how he was trapped in the void, is yet to be revealed. A one, Dr. Clasp and his Nurse, were mentioned in an episode, as "watching," Phoolery and his fellows.

There are 4 ailments that are trapped in the void with Phoolery, and are fragments of his mind that have gained independence. The first is "Callough," a pink version of Phoolery, with yellow eyes, and loud voice with a thick speech impediment. He's listed as "The Obsession" in the series title screen, and this is in reference to Phoolery's obsession with all things "Alice in Wonderland." His voice is an impersonation of the Mad Hatter from the original Disney Film.

The second ailment is "Facade," a turquoise palate swap of Phoolery with red eyes, and a thick east coast American accent. Phoolery described him as a "Sentient Nightmare sent to posses me," however, he seems to personify Phoolery's pessimism and self destructive tendencies.

The third ailment is "Grappir," a green version of Phoolery with orange eyes. He's listed as "The Problem," in the series title, and represents Phoolery's paranoia and overly aggressive tendencies. He has a beard and bushy eyebrows, a stark contrast to the rest's tacked on eyebrows.

The fourth and final ailment is "Sash," an overly effeminate and extremely camp individual, meant to represent mania and romanticism. He seems to obsess over other's appearances, and has several crushes with various ponies. His latest crush is Sunburst from the season 6 premier.

Other analysts and bronies should take care not to contact Phoolery, let alone try to find the location of his prison. He shows an obsession with famous villains, and he seemingly has befriended the very entities that got him locked away in the void to begin with. He's unpredictable, and very crafty. He is a prolific liar and trickster. The Phool you see in his videos, is not the true Jester. This is merely his lesser conscious acting in the fractured state of his mind. He is a criminal, who has been imprisoned for the betterment of all Equestria. Until we discover a cure to Phoolery's condition, and can be assured that his ailments are dealt with, we cannot allow anyone to interact with him.

Jess became a part of the Brony Fandom in 2011, thanks in part to his older brother Zach, who is arguably the bigger and better Brony between them.  Zach has become Jess' on call MLP encyclopedia, and go to sounding board for his projects.

Jess, before becoming a Bronalyst, established himself as a "Fanimatronic" voice actor within the "Five Nights at Freddy's," fandom in late 2014 under the handle of "TravellerTalks."  He worked with several fan artists and other voice actors on Tumblr, and became a part of the VA group, "S.S. Bite of '87," headed by OldManMurphy, aka WellHeyProductions.  He was put on the crew as the voice of Old Bonnie and The Marionette. During this time, Jess tried multiple other projects on YouTube, between ASMR role play videos, and dramatic readings.of H.P. Lovecraft stories. He also had some success streaming Tarot Card readings.

In summer of 2015 he took a hiatus from voice acting, and focused his efforts on rekindling connections with his old high school friends.  In February of 2016, this clique of friends became toxic due to in-fighting, and Jess cut all ties.  In March of 2016, upon hearing of Season 6's incoming release, Jess decided to return to the world of internet entertainment, and embrace the Brony fandom in a more active role, under the guise of his Pony OC Phoolery. 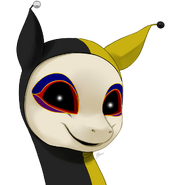 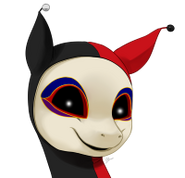 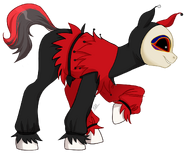