The Rift Café Wiki
Register
Don't have an account?
Sign In
Advertisement
in: Alicorn OC, Female, Alphabetical,
and 3 more

"tiff tiff" (only by Shark), Prissy

Not consistent, but active on DA. Uploads there at least once a month.

Pristine is a brony artist who has done a few written analysis on her DA account.  She is a white alicorn.  Reasons for creating an alicorn are stated in the first picture she did of her ponysona.

"I wanted my Ponysona to be an alicorn because even before MLP, I loved winged unicorns (as I called them).  Plus I feel I've overcome so much and pretty much 'mastered' myself you could say because I known who I am.  Alicorns aren't perfect and I am certainly not perfect! lol."

She does have a few videos on her youtube page, primarily made up of video blogs and MLP videos using her vector. She also has a few videos featuring her artwork. In the future she wants to create animatics. Most of her focus is creating artwork on her Deviant Art Page. While she does a lot of MLP related artwork (mostly she draws Brony OCs), she also does animal portraits, anime related artwork, and also creates stories. She loves creating written countdowns on her DA page too.

Pristine the Alicorn currently traverses the universe and this is how she found the Rift. She doesn't see herself as a princess and refuses to be called one. Her cutie mark is the Yin/Yang symbol and her specialty is balancing out magic by transferring it from one source to another. She also has the ability to purify magic. Side effects of doing these things though is that she can tire out from overuse. She's a natural born empath and has great knowledge of healing magic. Her coat is pure white, and her mane is royal blue, violet, and yellow. 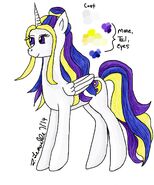 Reference sheet by Pristine herself 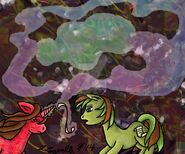 A piece of art featuring Voice of Reason and SEGASister 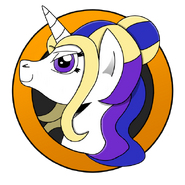