The Rift Café Wiki
Register
Don't have an account?
Sign In
Advertisement
in: Alphabetical, Female, Other Pony Type OC,
and 3 more

As quoted from the comments section from of this DeviantArt piece.

"Sketch-it: I had just joined the fandom and started to doodle my own random MLP characters. I noticed some had OC ponies so I picked my favorite from the doodles and made him my OC. Sketch was like me and loved to doodle, but he eventually got his cutie mark and didn't agree with his natural talent; so, he scribbled it out.

Ren Ama Misaki: When I was more into Anime than MLP. I was RP-ing with a ,[sic]now, ex-best friend and came up with this name. I thought of making a new pony OC and Ren was created. I was more into unique color combinations and WAY into beanies and collars. Ren is reserved and timid, easily frightened too.

Splunkbeats: So I had just watched "Die Young Fan Animation" by Vivziepop and was inspired to make this party-going pony! I made Splunkie to have the life of a party pony. She's by far the most energetic and outgoing of all my Oc's. Basically the cool kid I wanted to be.

Sparkfly: My ponysona, based off of how I look. I came up with her cutie mark after her name. It's just cute and I'm still trying to find out what it means. Anyways, she's basically me in pony form.

Scriptless: Ho boy, here we go! After watching a couple reviewers I realized that reviewing/youtube as a brony would be a nice lil' hobby, so I decided to give it a try. I wanted to be unique, much different than others, so I decided "Hey everypony does their videos by script, how about I do mine scriptless?" Thus the name was there. I designed her after watching "Somepony to Watch Over Me," that episode kickstarted my love for chimeras and then, after a few design ideas, I came up with a simple design; eventually adding on a final chimera form."

To Kill a Brony[]

Scriptless had this series planned out and even released a video explaining about it here on May 6, 2015, but never got around to it. To Kill a Brony or TKAB is based off of the popular animated series "To Kill a YouTuber " by mlgHwnT.  It is still unknown if she will ever continue this series. 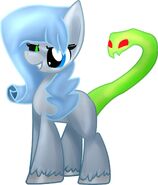 Scriptless and her lover; Tiger

A comic by Scriptless featuring Keyframe, GoldenFox, and AnY Entertainment

Page 2 of the comic

Thumbnail for the All Bronies Animatic
Community content is available under CC-BY-SA unless otherwise noted.