Coming from deviantart, Takara is a well-known brony artist specialising in digital and traditional art. Her username came from her Youtube Series 'Takara's Point of View' and stuck as her typical username across her outlets. Dedicated and independent, she strives to succeed in a career around her artwork. 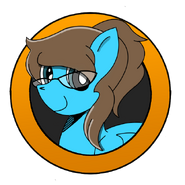 Add a photo to this gallery
Retrieved from "https://the-rift-cafe.fandom.com/wiki/TakaraPOV?oldid=14382"
Community content is available under CC-BY-SA unless otherwise noted.