The Rift Café Wiki
Register
Don't have an account?
Sign In
Advertisement
in: Alphabetical, Earth Pony OC, Male,
and 2 more

Voice often takes the time to point out flaws and plotholes when they are apparent, sometimes goong so far as to appear to be nit-picking or ranting. Voice is very cynical, easily-aggravated, and he doesn't seem to have a good tolerance to nonsense or lunacy among his peers. 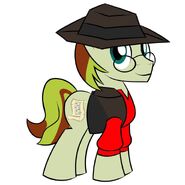 Voice of Reason as the Sniper from the TF2 Analysis Series

Voice and his apprentice, Ink Rose

Voice of Reason protecting his girlfriend, SEGASister from Horror Score 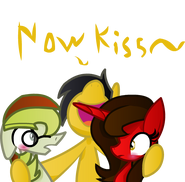