Your OC Sucks is a podcast that analyses fan-made OC's based on their appearance and backstory to give an opinion on how they can be improved if they need to be. This channel is currently managed by MummifiedThunderbirds, Commander Sparkle, Metibobo, and Smooth Sailing Pony.

The series was announced to be reworked in this video:

The new series, "YocsGalz" first premiered on October 30, 2016 with this video:

On June 26, 2017, YocsGalz was cancelled with the video: https://www.youtube.com/watch?v=cNL0Soyqplg and since then the channel has only been used for MummifiedThunderbirds' convention vlogs, with the most recent video on September 5, 2017 from his Bronycon 2017 trip:

The four masterminds behind Your OC Sucks. Art by LethalAuroraMage 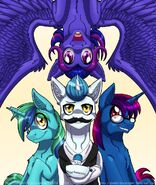 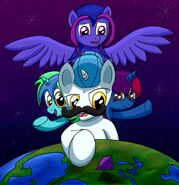 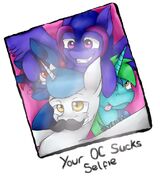 Your OC Sucks... As bats!
Add a photo to this gallery
Retrieved from "https://the-rift-cafe.fandom.com/wiki/Your_OC_Sucks_(Podcast)?oldid=15742"
Community content is available under CC-BY-SA unless otherwise noted.